“Philosophers and scientists struggle to understand cosmic consciousness, but Jim Carrey explains it with elegant simplicity to the child in all of us.”
~ Deepak Chopra

“Carrey's created a charming, fun to read, beautifully illustrated book with Roland the wave as a metaphor for the interrelatedness of everything in the world.”
~ Jane Fonda

A significant part of the charm of How Roland Rolls is the book’s extraordinary illustrations. Award-winning illustrator and animator Rob Nason met Jim Carrey after Carrey had seen samples of his work (which he loved!) then flew him to Los Angeles. 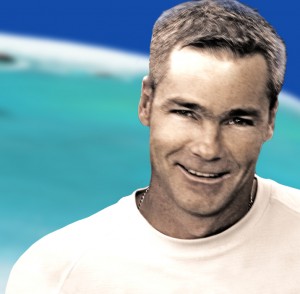 “It was a day I’ll never forget,” says Nason, from his home in Scottsdale, Arizona. “Jim is a total class act, a gracious, down-to-earth human being, and a deeply interested and interesting man.”
The plan was to see how their personal chemistry felt, discuss the book and the possibility of working together. Soon after they began talking, they discovered that they were both from the same city in Canada – Burlington, Ontario – and the chemistry was underway. Burlington is Nason’s hometown, and Carrey lived there for about eight years.

Nason is not just an illustrator, but an award-winning animation artist and fine arts painter, as well, specializing in lake home scenes. He has deep childhood memories of living near a major lake, vacationing at a lake home his parents owned. “Life is about a body of water for me,” he admits. And How Roland Rolls is a story about a wave in the ocean. More chemistry!

With a deep appreciation for the classical art tradition, Nason uses all of the skills of his eclectic art background in his illustrations, making his work relatively unique and highly identifiable.
“I’m always trying to get a painterly look with a natural environment,” Nason says. To that end, when Nason is working on an illustration, he uses a water-filled airbrush in his left hand while painting with his right. “It helps create the reality of an atmosphere,” he says. Then he enhances the result digitally. It’s his special blend of technologies, woven from years of traditional painting, illustration and commercial art experience, plus, now, the wonders of the computer. “I don’t want to be just a digital painter,” Nason affirms. “I always want to incorporate my experience with the earlier art forms. Very few younger artists even know those mechanics.”

Nason’s art background is multi-dimensional and life-long. As he says, “I began my work on the inside of my diaper. It was lovely finger painting!”

Jumping forward about 17 years, after high school, Nason attended the George Brown College Centre for Arts and Design, a prestigious art school in Toronto. The school had a tradition in its three-year program –at the end of each year, the second and third year students would present a show of their work. Top prospective employers from around the country would attend, looking for the best new talent, and two or three of the students would get job offers. At the end of Rob’s second year, his work garnered the only job offer to come out of the entire show!

The dean of the school credited Nason with his third year studies (“You’re not going to learn anything more here!”) and sent him on his way, “You start your new job in two days!” Nason joined the art department at McLeod Young Weir, Ltd., a major financial services company in Toronto’s King/Bay financial district.

A year later, Nason was hired by Sullivan and Bluth, a leading U.S. film animation company, founded by former Walt Disney animator Don Bluth, to work in their Dublin, Ireland, office. Again, the instruction was, “You start next week!” There nearly five years, Nason painted backgrounds for their animated films, producing anywhere from five to 10 paintings a week. “Dublin is a great place,” Nason enthuses. “I must return!”
Nason moved back to Canada with his wife and Ireland-born son, continuing his animation work via courier, before the days of online file-sharing. Soon, Sullivan and Bluth moved to Phoenix, Arizona, becoming the animation unit for 20th Century Fox Film Corporation. The Nason family followed, moving to suburban Scottsdale. The film company set him up with a state of the art digital home animation studio, and Nason taught himself digital animation.

So, with his background in illustration and fine arts painting, he could now add the magic of the digital world, and his unique hybrid style was born.

Over the years, he worked on a variety of important animated feature films – Thumbelina, Anastasia, Pebble, Theo, Titan A.E. and many more. The crew won a Golden Reel award on Anstasia, as well as an Annie Awards nomination. His work on Thumbelina garnered the Hans Christian Andersen award. His cover for the best-selling children’s book, Saltwater Taffy, was nominated as Cover of the Year and was a finalist for the prestigious Benjamin Franklin award.

One of today’s most respected (and recognized) illustrators, Nason is ecstatic about his work with Carrey on How Roland Rolls. “It’s truly a co-creative process with Jim,” says Nason. “Jim really knows what he wants. He’s an extraordinary visionary and communicator, and a natural art director. It’s a joy to be working together.”

How Roland Rolls is planned for release on September 24th. For more information, visit www.howrolandrolls.com and www.robnason.com.